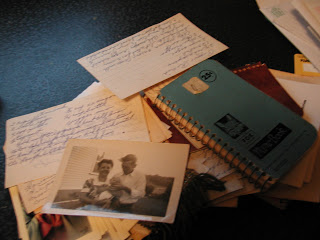 It’s late. We had just finished sorting through Mom’s things to prepare her home of over fifty years for sale. After Mom went in the nursing home it became evident she wouldn’t be able to return home. An old black and white photo catches my eye, stuck in amidst recipe clippings and saved cards that fill the shoebox I brought home from my parent’s house. In the picture Mom is broadly smiling, holding my sister Alice as an infant. Alice must be only 4 or 5 months old, no hair and squinting in the sun. My mom is wearing a crisp shirt dress with a white collar and sleeves. Her hair is up in the style of the time, rattail. Next to her is my father, fit and trim and playing with Alice, leaning in to her and my mother. It’s summer, at my grandmother’s farm in Hatfield. The picture says so much. It’s as if my mother is looking out to the rest of her life stretching out before her.

I pulled out a bunch of dog-eared wire bound memo pads. In my mother’s flowing handwriting are page after page of recipes of cakes, casseroles and Polish recipes. Stuck in between the pages are clipped-out recipes from bisquick boxes and newspapers. Recipes from friends have their names at the top with a comment on how good the recipe was.

The oldest one had pages so greased stained, yellow and brown, that the recipes were hard to make out. The ones I could identify, I remembered… apple twists, pierogi, red velvet surprise cake. Then I see her recipe for whoopie pies and inwardly chuckle about how Mom had done a one-upmanship on a neighbor over that one. I had originally had these whoopie pies at my friend Cynthia’s house and asked my mom to make them. When she got the recipe and made them for us, they tasted better. Even Cynthia thought they were better than her mother’s. Well, the word got back to Sophie, Cynthia’s mother, and she found her way over to our house. “How come I give you the recipe and my kid tells me your pies are better than mine?”

Well, Mom didn’t mind sharing. When the recipe asked for Crisco, she substituted butter. My mom was creative like that. She would take something and add just a little touch of her own to make it special and that much better.

When I was in first grade, Mom made my back to school clothes. One outfit I remember was a flared green skirt with a little green vest. Nice for sure but to make it her own design, she crocheted out of thread a butterfly and put two little rhinestones on its antenna and stitched it to the hem of the skirt. It was lovely and unique. Even though we didn’t have a lot of money, I thought I was the best dressed kid in class!

Toward the back of each book, pages were dedicated to names and addresses of family members and friends. It was fun to see my address change over the years from Easthampton to Sunderland to Deerfield and on.

Some of the memo pads didn’t have so many recipes as others. These pads had other entries. At the top of the pages my mother had written dates, 2-26-69 was one. Then there were a lot of numbers, some obviously added together, some seemed to be notations of a point in time when something happened because there was a note beside it that said, “reset” or “down.” These were the number of tubes she had run that day, when the machine was broken and at what time, the tracking of her work time and days. These pads were from the 60s when she worked at Tubed Products, a factory in Easthampton.

There were still recipes here and there. All the ladies who worked at Tubed Products brought their lunches with them, they didn’t live out of vending machines like so many today. They also often brought enough of whatever they made to share with others. This always prompted the sharing of recipes and Mom was good about asking for directions for things. But during those years she cooked less and less. She had found a new passion, doll collecting and her weekly tag sale adventures would eventually get her a collection of over a thousand dolls. Each doll would be carefully washed and hair combed before an original dress would be crafted from crochet or cloth. They were all beautiful in my mother’s eyes . Never having a doll as a child, she tried to fill that empty space with all the dolls she could find. We saved her favorites to take with her to the nursing home but so many had to find new homes. She brought a lot of happiness to others even late in her life through those gifts.

The last few books didn’t have the flowing handwriting of the early ones. The old recipes were appearing again and again but written larger and more shakily, over several pages instead of neatly on one. Finally in the newest looking pads, I saw pages where she simply signed her name again and again with trembling writing, practicing page after page after page. She must have been trying desperately to hang on….My fingers stroke the last pages, tracing her signature as I look at that smiling woman with her baby and husband and her whole life ahead of her. A whole life between then and now, reflected in those bits of paper.